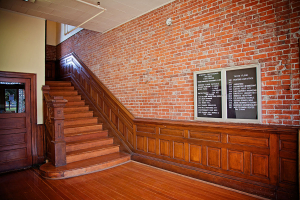 History of the Bowman Building in Pendleton, Oregon

The year is 1886. Wells Fargo wants to put in one of their banks in Pendleton Oregon; they want it in the Bowman Hotel. With the Bowman being right across from the Union Pacific Train Station, it was a prime location for the bank. Plans needed to be made for the transport of strong boxes full of valuables from the Station to the Hotel. One of these plans called for tunnels to go directly from the baggage room in the train station to the elevator in the basement of the Bowman, and then upstairs to the safe in the Wells Fargo office.

This tunnel was used for many years. Later when Wells Fargo had moved out of town and prohibition was passed; the tunnel came to life in another way. Pendleton, never wanting to be a dry town, created some of the more unusual speak-easies in the area. One of the better known speak-easies was in the basement of the Bowman. You entered down the stairs in the back of the building, gave your password, and went directly to the bar. To the right of the bar was a fireplace and above the fireplace were two lights, a red one and a green one. When the red light came on, that meant trouble and the cops were raiding the speak-easy, so the bartender would pull back the fireplace to reveal a hidden room. This hidden room was actually what was left of the tunnel that ran across to the train station, but the station had moved by then, so you could just make it under the street before you ran out of tunnel. The patrons would wait until the green light came on inside the hidden room, then they would re-enter the bar room and resume their festivities.